Hip laxity and the risk of degenerative joint disease

For example, the graphs below show the probability of degenerative joint disease for dogs of different ages as a function of their distraction index (DI), which measures how far the ball of the hip joint can be displaced from the socket.
In the Rottweiler (top graph), for a DI = 0.75 (on the horizontal axis), there is a 50% risk of DJD by the time the dog is 35 months old, and 50% of the Rottweilers with a DI = 0.95 will display DJD by the time they are 16 months old. The greater the DI, the earlier in life the dog is likely to display signs of degenerative joint disease.
Rottweiler 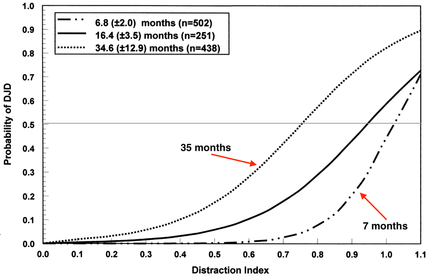 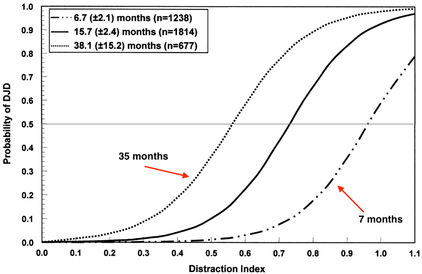 German Shepherd Dog (Smith et al 2001)
In fact, at all ages, the probability of DJD in GSD is greater than in the other breeds that have been examined at > 24 months old (the line for GSD is shifted to the left relative to other breeds; below). 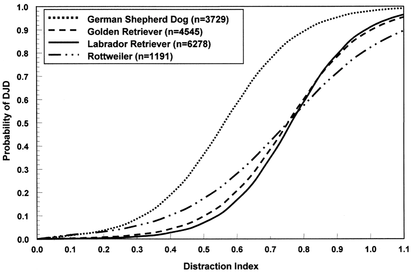 German Shepherd Dog, Golden Retriever, Labrador Retriever, and Rottweiler; all >24 months old. (Smith et al 2001)
The bottom line here is that breeds vary in their sensitivity to hip laxity in the development of degenerative joint disease. A Labrador Retriever with a distraction index of 0.5 has a low risk of DJD by 24 months (about 10%), while the same DI for a GSD is associated with a 40% risk of DJD by the same age. A DI of 0.5 presents a relatively low risk of DJD in a Rottweiler or Golden Retriever (about 10%), but a significant risk (40%) in a GSD.
This means that interpretations of hip scores need to be breed-specific. This is highlighted as well in a study of breed-specific differences in hip laxity in smaller breeds. This graph shows the distraction index (vertical axis) for 15 breeds of dogs weighing from 4-16 kg (8-35 lb). This study focused on dogs with normal hips that were free of any evidence of DJD, so in these dogs hip laxity did not result in the development of hip dyspasia. The differences among these breeds are striking, with the highest DI found in the Dachshund, Pekingese, and Miniature Poodle. Note as well that these measurements varied little among individuals, as evidenced by the small standard deviation (SD) relative to the magnitude of the distraction index. 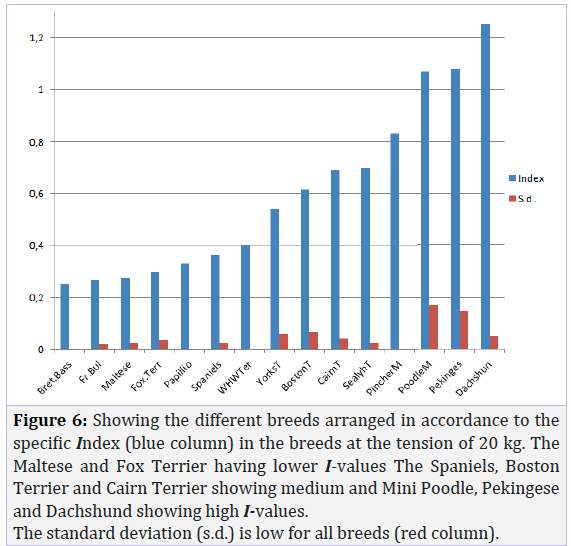 Arnbjerg 2017
The degree of displacement in the breeds with the highest DI is really quite remarkable. This is a series of radiographs of a Dachshund, first in resting position (top left), then with distraction resulting from 12 kg (top right) and 20 kg (center, below) of tension. 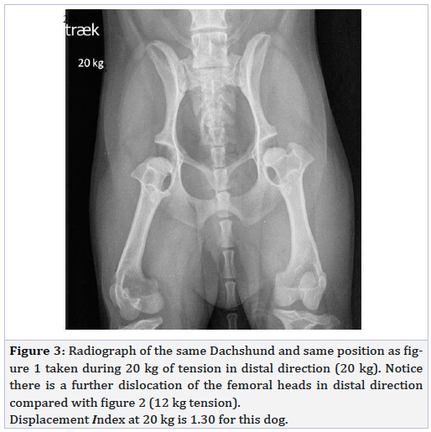 Arnbjerg 2017
In the third photo above, you can even see darker areas between the the femur head and acetabulum where a vacuum has formed as a result of the large displacement. 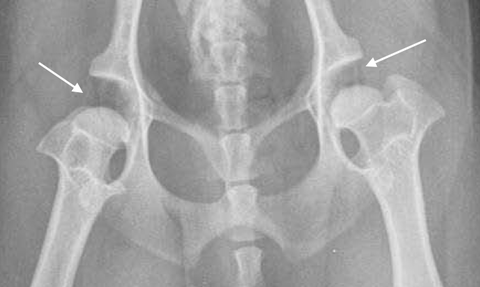 Arnbjerg 2017
​
Why do some breeds have looser hips than others? We don't know. Interestingly, the breed with the tightest hips based on DI is the GSD, yet as we've seen this breed has the earliest and most significant development of degenerative joint disease. This seems to fly in the face of the notion among some breeders that loose hips in herding breeds provide greater flexibility that is useful in these working dogs. Even with relatively tight hips, the GSD is most significantly afflicted with joint degeneration that would compromise its function as a working dog.
Most importantly, these data show that hip laxity alone is not a very good indication of whether a dog will go on to develop joint disease. Dogs could be removed from breeding based on DI that never develop DJD, and others could be allowed to breed based on a score that presents low risk in one breed but high risk in another.
What about genetic tests for hip dysplasia? There are several published studies that claim to have identified genetic markers associated with the development of hip dysplasia, and some of these have been developed into commercially available tests. However, they are breed specific, and at least one has just been shown to be of very poor predictive value (Manz et al 2017).

Unfortunately, the situation for breeders wishing to reduce the incidence of hip dysplasia remains problematic. The best options remain consideration of the phenotype of related dogs (as in Estimated Breeding Values), and a genomic rather than marker-specific approach to identify genetic risk using thousands of markers (Guo et al 2011).
Dog owners and breeders can get comprehensive and up-to-date information about canine hip and elbow dysplasia in the ICB course Understanding Hip & Elbow Dysplasia, which is offered online and available anywhere in the world. The next course starts 7 August 2017.
Carol Beuchat, PhD
Source: http://www.instituteofcaninebiology.org/blog/hip-laxity-and-the-risk-of-degenerative-joint-disease
REFERENCES

The Sheepdog and Me – Teen Sheepdog Stars Contest!
Tenders

THESE DOGS LIVE TO WORK — AND THREATENED ANIMALS LIVE BECAUSE THEY DO
Nov 12, 2017 - 12:44
END_OF_DOCUMENT_TOKEN_TO_BE_REPLACED